Sclerometric method Technique to estimate the compressive strength of concrete

Sclerometric check allows an estimation of the compressive strength of concrete in the structures already built, or even in new buildings. Among the non-destructive tests that can be performed on concrete structures, there is a mechanical method that allows determination of surface hardness through the use of the sclerometer.

This method is based on the correspondence between the tensile strength in compression and the surface hardness of the concrete by measuring the elastic energy remaining. The instrument used to conduct the survey is the sclerometer , consisting of a mass moving with initial energy obtained by compressing a spring. Releasing the mechanism that holds the compressed spring in the standby position, the mass lashes on the concrete surface to which the sclerometer is positioned.

During the collision, the kinetic energy is partly absorbed by the concrete, with phenomena of plastic and permanent deformation, and the remainder is returned by the moving mass, with swinging movements which progressively decrease, stopping in the end in a position that is closely linked to the hardness of the concrete. 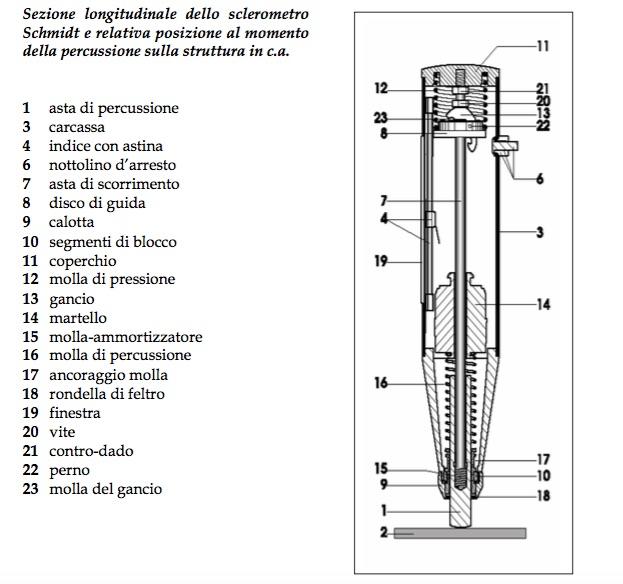 Sclerometric method is not intended to replace other methods for the determination of concrete’s resistance. A rough estimate of the compressive strength can be obtained only in the presence of a test curve of calibration correlating the rebound index to the resistance of a reference concrete.